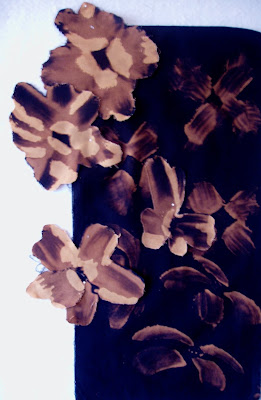 While continuing the quilting on Mulberry and tweeking the Poppy quilt, I have been experimenting with doing some discharging with liquid dishwasher detergent and a brush on black fabric. I have been doing it in three different stages so far. First I left it on only until I could see some changes. Then I rinsed and dried and put it on again in some areas and repeated the same thing. Then I put it on again in some other areas and repeated. I decided to cut out some of the flowers just to see how they could be used in something. I still want to do one more discharge but I am sort of getting the hang of it and understand more how to handle the brush better and how long to leave it on to get the effect I want. You can see where it was put on too heavy and not feathered out well, but this is all experimental to prepare for the real thing. 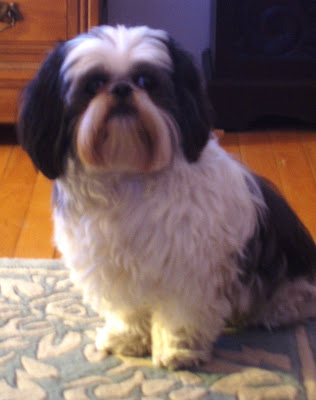 Poor Barley was not happy with the thunderstorm we had last night. He just does not like it when it storms, poor guy. He looks at you like he is saying "do something!!!!" Barley is 6 years old and is a very special dog. He was rescued by my daughter and I and although he has quirky eyes and has a fear of storms, he is so lovable and sweet. Luckily the storm passed through quickly and he relaxed.
Posted by Barbara Strobel Lardon at 9:25 AM

What an interesting idea and lovely result! I love the variances in the colors with the reapplied detergent. Your idea should be written up for Quilting Arts. I have never seen anyone do shading with discharging.

What does the dishwashing liquid do? I guess I didn't quite catch that part.

By fro, I mean for of course!

This is amazingly abstract. I'm curious for more!

I hadn't heard about using dishwasher detergent that way, but I guess I'm not surprised it takes color out, because it's close to lye in strength. Does it always turn black those purpley shades, do you know? It looks very different from bleach discharging. Very pretty.

I believe it depends on the fabric. It can be orangy or purply or even reddish. If I understand it right it all depends on what colors they mixed to achieve the black. I remember one quilter I read about who would carry a discharge agent with her and then ask the fabric store if she could snip off a tiny bit of fabric so she could take it out to the car and put the discharge on it and see what color it would be. She said most stores would accommodate her.

Oh please explain this technique a bit more. I have dishwashing detergent and dark cloth. Is that all I need? What do I do? I so want to learn to do some of this but never have the right supplies! Please, tell me more!