Something Old And Something New 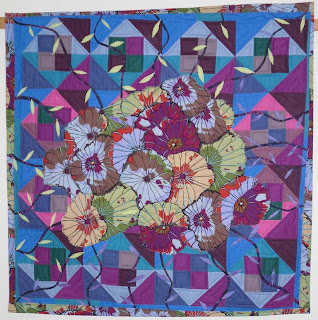 Have you ever made a quilt that you just hate. Well I made this quilt probably 18 years ago. I hand quilted it and named it "Amish Sunrise". It used to have a big yellow sun in the middle of it. I do not know what I was thinking. Yet all the work made me angry to just toss it. So several years ago I decided to fuse some Kaffe Fassett fabric in the middle to at least cover the sunrise up. I machine quilted that and thought it was still ugly. So it got folded up and put back in my cupboard. The next time I dragged it out I still did not like it, but now what do I have to lose. So I added the stems and the leaves and machine quilted them, fused on a binding and folded it up and put it in my cupboard where it still resides. 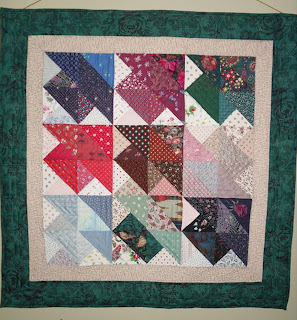 Still trying to organize my studio and I revisited this quilt. This quilt is one I made in the 1980's?
I took a class in which you had to bring a bag of scraps and then make them into something.
I decided to make arrows all pointing in one direction except one. I flipped that one in the opposite direction and also used the reverse side of the fabric in the block. I titled this quilt "Wrong Way". It was also the very first quilt I machine quilted! There are little signs in the border where I quilting the words wrong way on each and every one of them!
I think I will always keep this just because of that. 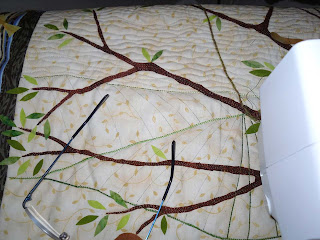 Just to prove I have not been totally idle these last few days, here is Mulberry Bush being quilted and quilted. 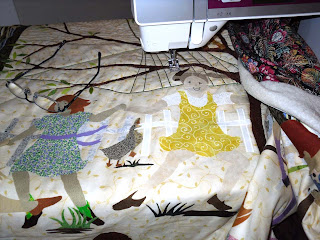 I am making progress and I am happy with it so far. But it is tedious and very time consuming.
Posted by Barbara Strobel Lardon at 4:08 PM

What do you do with those quilts that you end up not liking? I have an Amish twin size quilt that I have come to despise! It is entirely hand quilted-in for a penny, in for a pound!

Thanks for the pics. I enjoyed the ones of your house too-it looks very friendly and cosy there:)

Love the Mulberry Bush quilt, and the other quilts, too. Must be someone who will love that quilt that first quilt you posted, that you say you hate.

I've made a few that I liked, but grew to hate because I "overworked" the art work in them to the point of feeling like they were ruined because of it. I did this one that was wonderful, but couldn't leave it alone. (laughing) It had this girl with wild hair on a background of pieced circles in gorgeous fabrics. And I messed up her eyes because I just couldn't leave it alone. Thought I could make it better. Boy, was I wrong and wished I'd just left it alone. This is after it was quilted that I tried tweaking it. And back then, I was still paying someone else to quilt my quilts. I cringe thinking about it. Now, if I'm not totally happy with some art work, it won't get appliqued onto the background. Or if I'm not happy with the background, then I won't waste art work on it. Even if everyone else thinks it's fine, if it bugs me when I'm working on it, I know I won't be any happier down the road!

I keep going back to the first quilt ... the beautiful Amish one with the wild and wonderful flowers. I think your additions are wonderful and they make it look more like something you would make. What size is it?

Well, now, the mulberry one is something altogether different. What a long way you've come from "Wrong Way".

I think you made a great thing out of the first quilt. So bold! Love it now.

So the question seems to be answered......you can rework a quilt!