There has been a lot going on the last few days which meant not a lot of quilting was done.
My grandson came for a visit too.  There was a baby shower for my niece so all the girls were going to that.
Last night I can hear Watson playing with something that did not sound like his usual toys.
I looked and realized he found something that had made it under the couch while Max was here.
It was "Flo" one of the cars from the movie "Cars" which is one of Max's favorites. 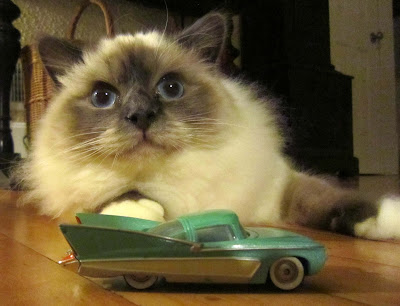 Seems like Watson is claiming it as his own!
Posted by Barbara Strobel Lardon at 12:43 PM

That is so cute, the car fits his personality. Mine love jingle balls, you can hear them all night, slamming them around the house, lol.

Watson has discerning taste. I'm sure he is missing all the commotion that was around when everyone was there.

That is funny! It reminds me of the posters of The Attack of The 50' Woman! He needs a little city scape or something to make it complete! So cute:)

Nice header and colors too:)