Boreal Under the Needle 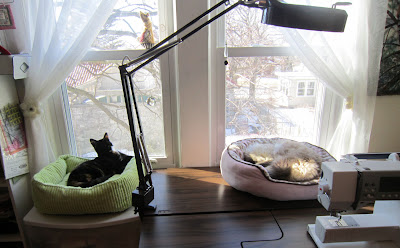 Well first off we were shocked today when we took Watson in for a tooth cleaning.  He was in for his yearly and they noticed his gums were inflamed so needed to clean the tarter off and ck. his teeth.  Well he has a hereditary gum disease that gets bad when there is any tartar on the teeth.  They called me after he was sedated and said one whole side was decaying and the other was starting.  So 17 teeth were pulled.  He must have been in pain but showed no signs of it.  Cats hide pain.  So he is staying over night and I will pick him up tomorrow.  He will still have his fangs and his front teeth and will have to eat wet food all the time.  Poor guy! 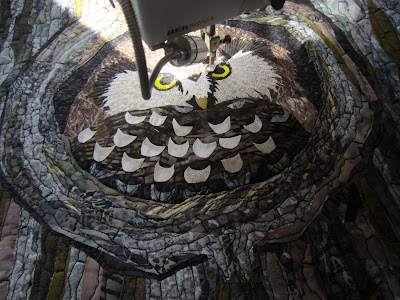 Well after that news I had to do something to take my mind off of it and went to work quilting my Boreal Owl. 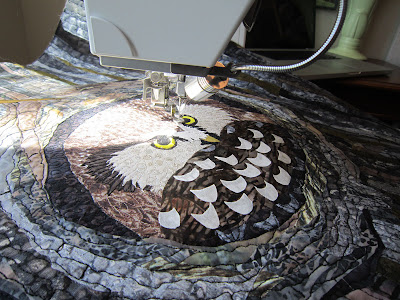 He is getting there little by little.

We also had a setback when a pipe broke while we were installing the toilet.  Had to shut off the water but it still leaked into my basement laundry before we got it off.  I spent house cleaning that mess up this morning.  A plumber is coming hopefully Friday to fix it and install the toilet and sink in our half bath and then we are DONE!!!!

Poor watson, seems purebreds have more problems than strays. The new piece is coming along beautifully, always love how you use the stitching to make it even more dimensional and textured.

What a string of rotten news.

Poor old Watson, and poor you! The owl is looking great though. I noticed your bendable bright light which reminds me I've been meaning to get one.

When it rains it pours! Goodness. I wouldn't think a cat had seventeen teeth in total. Poor little guy.

Well, everything will eventually be OK and in the meantime, great progress on your owl:)

Poor Watson. Riley had that and lost a front tooth...incredible how long and how deep those teeth are. Sorry to hear about your pipe. Your latest owl is a HOOT!

Hugs to you and sweet Watson. His poor mouth is going to be a bit sore. Prayers for a quick healing there!
We have had plumbing issues in our neck of the woods. We are blessed to have a good plumber. Hope yours gets the job done fast. You have certainly done enough to support the contracting industry :-)
Love Boreal Owl! A new forest creature comes to life!

Don't cats prefer that wet food anyway? Maybe he will not be worse for the wear!
I NEED that cool light you have attached to your machine!