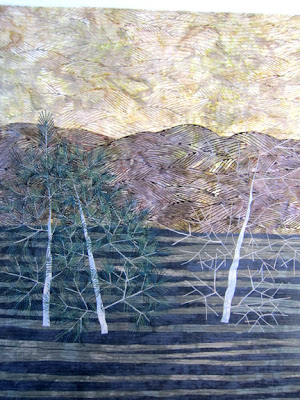 In between sessions with Zoey and shoveling snow I did get a start on quilting the background, beginning with what is furthest back...Some low growing pines.  They really look odd here but there is a lot more in the foreground so I am only doing what will partially show and remember, the owl will sit in the middle.

Last night we got a foot of snow with high winds making it drift to 5 feet in some areas.  This is my view early this morning when I opened the blinds in the dining room. 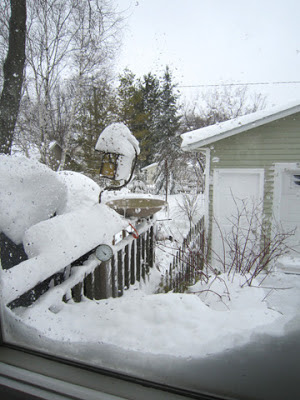 Then I moved on to the kitchen and  saw this. 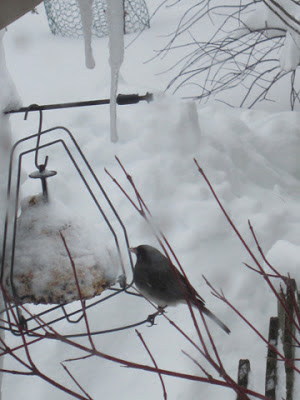 The birds were already out trying to get something to eat after a horrible night of howling wind. 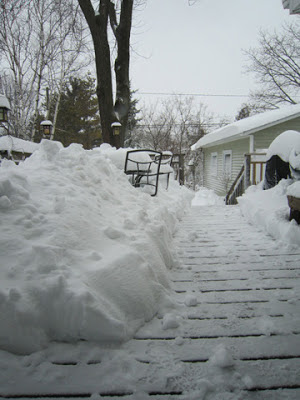 Then it was time to put on the boots and get out there to shovel a path for the dogs so they could get out .  I had so much snow on the deck already I had to shovel over to the steps and dump it off the edge. 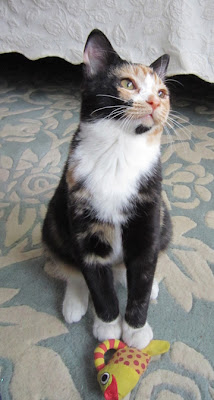 In the meantime Zoey is becoming more comfortable and used to the noises in her "safe room".
She played and played with me this morning while we waited for Bob to finish snowblowing down  at our store. 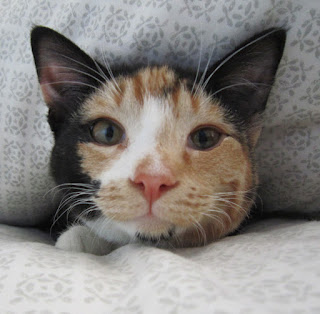 She loves to burrow under the covers and peak out at you.  I think she is going to be quite a stinker once she has the run of the house.
Posted by Barbara Strobel Lardon at 10:24 AM

Snowy weather and a new kitten sounds so cozy, but I'm very glad the worst of the snow missed us!

You got a lot of snow, would love some here but not so much, lol. All we are getting is lots of rain and that is just miserable. Zoey looks so happy and you can see she is so content and happy in her new home, no more frightened eyes.

That is way too much snow! Especially if you have to shovel it out. Beautiful kitten though.

I am loving the background fabric of the hills and sky! Is that a pattern in the fabric or the quilting giving those wonderful lines? What a great series this one is.
We have snow, and more snow and it is still snowing but thankfully it is also pretty warm so it is melting before it gets much depth. And Zoey is a beauty!!

I love the background, hate the snow and love the sweet kitty! I'm so happy she's adjusting. Think of me at my golf lesson at noon and then think of taking a few months away in the winter when you sell the store! :)