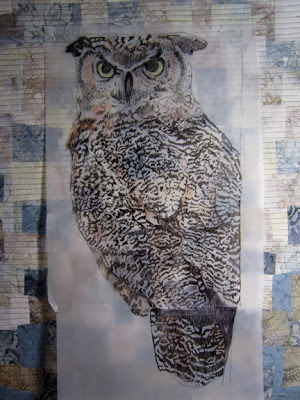 The plumber came today to fix some terrible plumbing that we discovered was in our bathroom when our ceiling caved in due to the porch roof leak.  So I took the dogs upstairs to my studio so they would not be in his way following him everywhere while he worked.   So I spent that time making my new background for my Great-Horned Owl piece and then sketched him out.  I found a photograph I especially liked on the website of Ron Austing a wildlife photographer.  I loved one of his photos so I emailed him asking permission to use one of his photos,  I included photos of my other two owl quilts.  He replied that he is giving me permission so I copied that email and put it in my files.  His website with the photo is:  Ron Austing

After finishing the background I sketched the owl from his photograph.  It took quite a long time since this quilt will be a little bit bigger then the other two. 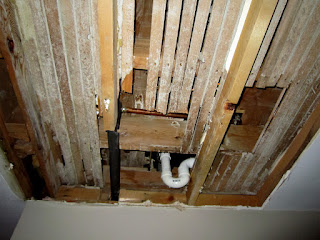 The plumber left late and now we have new plumbing in the bathroom.  It looks strange amongst the construction up there but we feel so much better that is fixed before the ceiling is closed up again.   Next step...the contractor who is coming in the next few days. 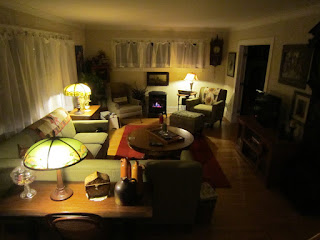 This is one of the only rooms that is feels untouched by this.  The guest room has the closet emptied out so that they can put in an access panel to the tub for any future issues so that is all over the bed.  The dining room has all the kitchen stuff in it that had to be moved out of the way for this work.  However the living room is still comfy and that is where I am now.

I can't wait to see what fabrics you use on this one, has a lot of detail in the feathers. It is nice to have a clean spot to relax in, I finally got some cleaning done today, finally getting my energy back. He does have some beautiful photos and I never realized there were so many varieties and looks to the owls, have to check out more photos of owls.

Thank goodness for one room of normalcy! Sorry about all of the hassle but honestly, things are moving much faster than I thought they would be moving!

And she's off, working on the next owl. So glad your repairs are underway.