Coneflowers Started & The Wonder of Nature 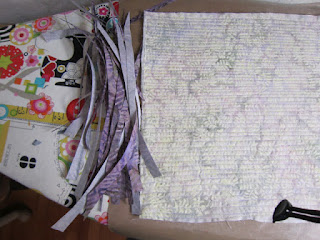 I am beginning work on my next 12x12 quilt.  This one will be full of coneflowers.   I begin by taking my quilted background and cutting strips of grasses to add to it. 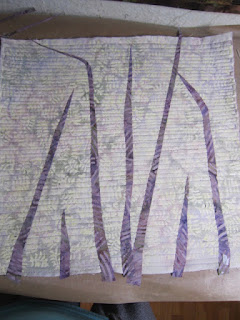 As I fuse on the grasses I quilt them.  This makes it so much easier once they start overlapping each other.  No stopping and starting over and over. 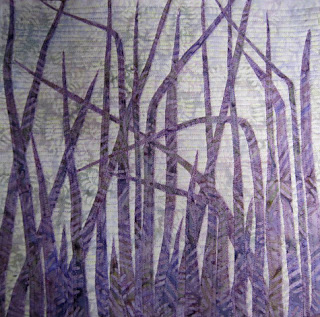 When I am happy with the layout and the amount I stop and now I will start making the coneflowers that will be on top of this layer.

I heard about a Redtail Hawk and Great Blue Heron nests that Cornell University Ornithology Lab had put cameras on to watch them laying their eggs and raising their chicks.  I had to take a peak since you can watch this live everyday.   Now I am hooked on watching not only them but also another two eagles nest in Minnesota & New York.   It is fascinating and I have learned so much about these birds. 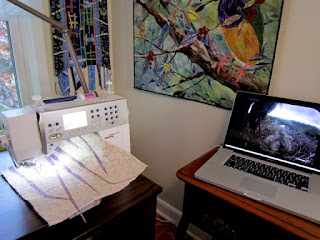 Here I am quilting and watching the Great Blue Heron's nest and her chicks.  They are older now so she is not laying on them like she did in the first few weeks. 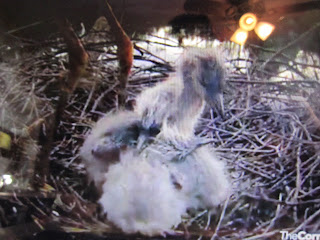 They are awkward and clumsy but oh so sweet and already know by instinct so many things.  The nest has been attacked numerous times at night by owls.  So far the parents have been able to fend them off. 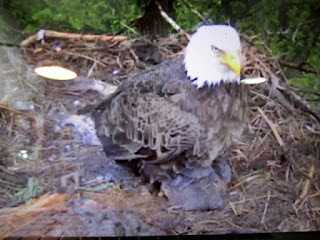 This is the Mother eagle with her one surviving chicks in Minnesota.   There was a terrible thunderstorm that went through and one of her chicks was blown out of the nest while the other shown here got stuck down in a sink hole of sorts caused by the deluge of rain.  The parents were unable to get this baby out of this hole and he was dying so the DNR went up and pulled him out and took him to get him back to good health.  After two days they returned him to the nest and everyone hoped the parents, which had stayed in the area, would return.  It took 24 hours of this chicks peeping until they felt safe returning.  Now she is ever vigilant and the eaglet is growing and safe. 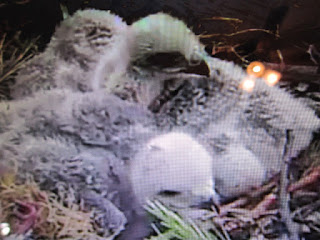 Then there are the Urban Red Tailed Hawks who return to the same football field light and make their nest.  They are near Cornell and there is lots of car, bus, and student noises all around them as they have their own little world high above.  The three hawk chicks are just beginning to grow pin feathers and their beaks are changing from white to black.  I feel so lucky to be able to watch all these birds in their private world high up in the trees or a parking lot light structure.
Posted by Barbara Strobel Lardon at 9:23 AM

I like how your new piece is coming out, can't wait to see more. I made the mistake of not quilting before I did he appliqués, so now I think about that, before I start.

So sweet and such a miracle! I love Cornell's whole efforts with birds-their site is super.

Clever of you to quilt as you go. I look forward to seeing this piece progress.

Thanks for the wild chick stories.