A Walk In The Woods 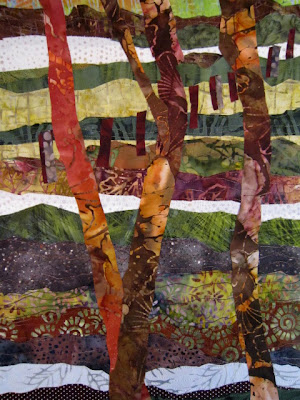 I have been working here and there due to a cold I caught and have not been able to get rid of yet.
I have added my spring trees and am happy how they added more perspective to the scene. 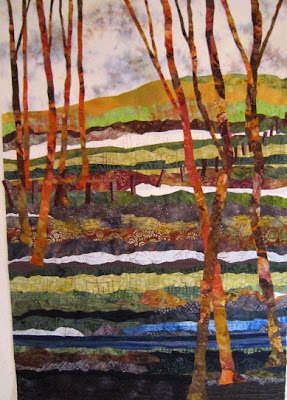 I idea behind this piece is a memory of mine as a young girl.  I used to go hunting with my Dad not so much because I liked hunting (I never carried a gun) but because I love walking in the woods and fields.  My Dad was a very successful man but he worked hard to support a family of nine children.
If you wanted to spend time with him you had to take advantage of the off time he spent hunting and fishing.  This was not due to just pleasure but also to feed the family.  So I would go with him and we would walk down to the river and cross that.  You rarely walked far before  you had to crawl under or over a barbed wire fence and believe me, I rip several jackets doing that.  It was beautiful in spring when the birds were singing and it was so peaceful.  There was a little bit of snow in the shady areas but the rest was already turning green.  There are just a few things that keep me in the present or the Now.  Walking in the woods is one of them.
Posted by Barbara Strobel Lardon at 12:42 PM

I am really liking this so far. A lot! Something about the bare trees against the landscape is so peaceful and inviting.

Loved the story too about spending time with your Dad. Take the time when you can get it right?

This will be truly beautiful when it's done. Hope you feel better soon.

Thank you both. I am very happy how it worked out. :)

Thank you for the trek back in time and shared moments with your father, as well as through the present with this striking piece.

Lovely quilt for a lovely memory!

I love a walk in the woods. This is going to be beautiful! What a wonderful way to always remember your dad.

this quilt exhibits everything you described. It's perfect!

Love the fabrics your choose for the trees, gives it so much nice texture.

I love it! I feel like I'm walking with you!

I love it! I feel like I'm walking with you!

This is already one of my favorites! So expressive with the colors and lines.

Your father loved that time with you just as much as you did. Such experiences are rare and beautiful.

Blessing those good memories through your family and your work and sharing it with your grandchildren is a generous gift for all.