In a Blue Mood 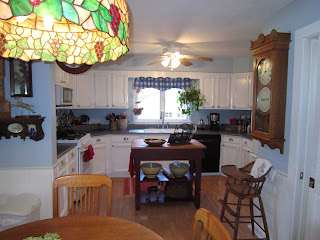 Winston is still not his self.  I have until tomorrow and then I will call the vet again and see if there is something else that will snap him  out of this.  So in keeping with my blue mood I decided to paint my kitchen from gold to blue! 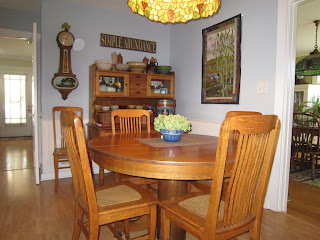 The I took down the quilt and replaced it with "Cobs".  Looks great against the blue. 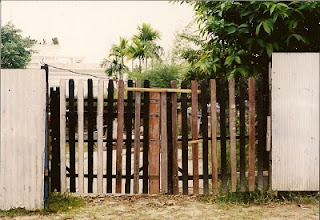 Today was the reveal for me for "Intrepret This!"
This was the picture we had to interpret.
Here is my interpretation: 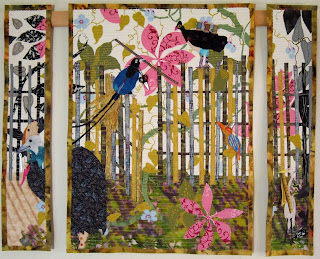 "Don't Fence Me In"
I thought about this photo and listened to some of my fellow members of "IT!" comment on the lack of color in it.  So I began to think of the birds that are native to Indonesia who would come and open the gate releasing the color that is beyond it.  I chose the Bluebird of Paradise to do that.  Then I added
yarn to his tail which is a puff ball of feather.  In addition to making my birds "sewing birds and quilters" I embellished each of them with a sewing item.
The color is exploding out of the open gate flooding the black and white foreground.
Shadows were added with Shiva paint sticks.
It is machine quilted.


One failure of this piece is I should have brought more black and white into the piece from the sides.
I know that it is not noticable enough and perhaps if I also made the binding on each side panel black would have helped.
I chose to make this a triptych because of the obvious three sections in the photo.
I hope you see the fun and humor in this piece...it was fun to work on.

Oh this is wonderful! What a whimsical idea to let the birds carry your sewing equipment! I never thought that so much can be achieved when I saw the photo.

I love it and how you made it into your own story with the sewing theme, it is wonderful!

Barb, Stop being so critical about what you did. It is fantastic exactly as it is. I love it. You have made it magical with your great imagination, and your story is the icing.
Many hugs, Cameron

Hey, when did those birds acquire those sewing notions?:)

Sorry about Winston-certainly longer than I would expect but maybe the viral meds will help out. Keep us posted.

The kitchen looks great-I love how you just painted it. That would have been a major discussion at our house.

I love your interpretation. The birds are so cute with the sewing notions. I like the idea of a tripytch too.

I would certainly pick blue over gold any ole day!

Your piece is just so whimsical and cool!

Both the kitchen and the quilt look wonderful. Like Libby, I'm amazed that you did it so quickly. A big job!

Such fantasy beyond the gate; your imagination is boundless.

Did you know that blue walls inhibit the appetite?