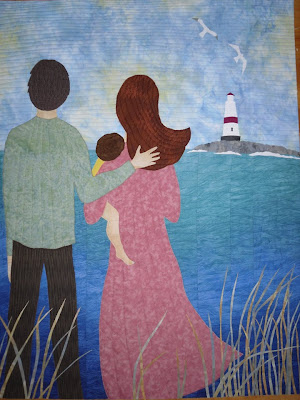 Here is No. 15 - "Endless Possibilities".
I have almost finished quilting it.

Got a bit behind because before all this started, I had planned a weekend at the Lake for my husband's surprise 70th birthday Party. I rented a beautiful house on Powers Lake and all the "kids" and their husbands/boyfriends, two of our 7 Grandchildren all got there early and
loaded up the frig as well as decorated. Bob and I went down there on the pretense that I was taking him for an overnite and dinner. It was quite the surprise for him since two of our daughters live in Indiana and we do not see them as often as we would like.
So it was a great get away.

But back to reality. It was much harder to get back in the swing of creativity.
I thought I would be refreshed and ready to go but instead it was like my creative "flow" had been interrupted. It took me a few days to get back into it and feeling more like I was forcing myself to work.
Posted by Barbara Strobel Lardon at 1:54 PM

It was probably good for you to get away anyway. I know the feeling of being out of the groove. Did you have sketches of all of the ones you are making before you started?

I understand getting interrupted--then, it does take some time to ge back but you are doing splendidly!